Skip to content
World Jurist Association > About the WJA > Rule of Law, Energy Transition and Climate 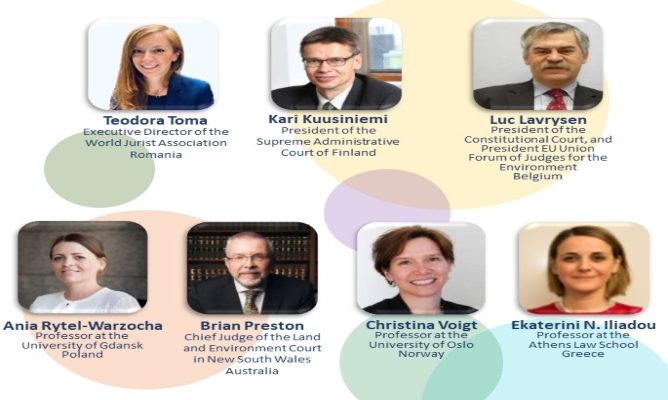 The Opening Session Helsinki of the World Law Congress New York 2023 gathered prestigious judges and academics who presented current environmental cases and their relevance in protecting human rights and the Rule of Law.

On November 7, 2022, the World Jurist Association (WJA) held the Opening Session Helsinki on Rule of Law, Energy Transition and Climate, which featured presentations by expert practitioners and academics from different countries. The presentations included theoretical and practical presentations of current international cases on environmental and climate mitigation issues, highlighting the relevance of sentences and sustainable energy policies in the global context and as a guarantee of the protection of human rights and the environment for future generations.

The online meeting, prior to the 28th edition of the World Law Congress to be held in New York on July 20 and 21, 2023, was presented by the executive director of the WJA, Teodora Toma, and moderated by the president of the Supreme Administrative Court of Finland, Kari Kuusiniemi. It also featured presentations by Ekaterini N. Iliadou, Professor at the Law School of Athens, Greece; Luc Lavrysen, President of the Constitutional Court of Belgium and President of the European Union Judges Forum for the Environment; Brian Preston, Chief Judge of the New South Wales Land and Environment Court, Australia; Ania Rytel-Warzocha, Professor at the University of Gdansk, Poland; and Christina Voigt, Professor of Public International Law at the University of Oslo, Norway.

Advocating for the Rights of Future Generations: Climate Policy and Sustainable Energy

In his introduction, judge Kuusiniemi described the impact of human activity on the “radical changes” in the environment and the European complexity given that “Russia is using energy as a weapon, which makes the energy transition necessary”. He then pointed out that “institutions must take care of the environment, support human rights and protect future generations.”

🗣 Kari Kuusiniemi, President of the Supreme Administrative Court @KHOtuomioistuin, setting the Scene for the panelists.

Meanwhile, Professor Iliadou focused on the European Union’s policies towards energy transition, emphasizing the need to establish climate laws as a top priority. She stressed that, being “energy a common public good, both in companies and homes, public intervention to guarantee it is essential”, adding that energy “impacts on the environment and on local and regional pollution”. She also justified the need for public intervention in the energy sector, as it traditionally rests on three pillars that protect future generations: “security of supply, affordability, and environmental protection”.

Judge Lavrysen then focused on the nexus between environmental and energy guarantees and the separation of powers and constitutionalism to protect the Rule of Law. “Climate change policies are complemented by constitutional rights such as corporate freedom, equality before the law, non-discrimination.” He reviewed European jurisprudence towards climate neutrality. The president of the Belgian Constitutional Court concluded, asserting that “the demanded policies are insufficient in relation to compliance with the European Convention on Human Rights, potentially conflicting with the separation of powers and thus with the Rule of Law.”

In this vein, Justice Preston explained the Australian government’s accountability in the face of climate litigation. He referred that the government “must take the lead in establishing and implementing the strategic, policy and legal frameworks necessary for effective climate action.” However, Preston stated that the administration, in some cases, “adopts policies, but does not implement them” and it is then when “the judiciary must hold the administration accountable for compliance”. Among some of the incidences he identified and exemplified in his intervention are the failure to adopt climate policies, the adoption of illegal policies, the failure to implement policies or their inadequate or illegitimate implementation, and the failure to take adequate measures or the failure of the duty to take them.

All this can lead to climate change affecting fundamental rights, such as the rights to a clean and safe environment, life, health, food, water and development, among others. Prof. Rytel-Warzocha further elaborated on this issue, adding that “in the global context, those most affected by climate change are usually those who contribute the least to it”, and that “its impact will also affect the rights of future generations”. Exemplifying the case of Poland, she concludes that environmental regulations are extensive, but reflect “the need for legal instruments to ensure that climate change is effectively combated to avoid its impact on the human rights of current and future generations”.

For her part, Professor Voigt presented a Norwegian case study in which the government was accused of violating fundamental rights by granting ten licenses for oil exploration in the Barents Sea, which would generate a large export of CO2 emissions. After passing through various Norwegian courts, the case is currently before the European Court of Human Rights. Despite Norway’s request to dismiss the case, it is a juncture that “opens the door to the recognition of climate damage as a violation of human rights”.

Judge Kuusiniemi closed the panel by inviting those present to continue the discussion at the World Law Congress New York 2023 and stressing that “this Opening Session is one further step towards the mitigation of climate change by legal means, by the efforts of the courts and academia”.