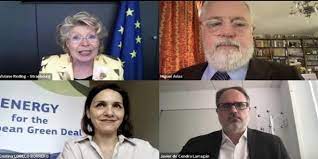 The World Jurist Association (WJA) organized the panel “Degassing Europe: Will War Accelerate the Energy Transition?” which is the first Opening Session of the “on-going” World Law Congress 2023. This virtual meeting brought together Miguel Arias Cañete, former European Commissioner for Climate Action; Cristina Lobillo Borrero, Director of Energy Policy at the Directorate General for Energy of the European Commission; and Javier de Cendra, Dean of the Law School of the University Francisco de Vitoria and expert in Environmental Law.

Viviane Reding, vice-president of the World Law Foundation and former vice-president of the European Commission, moderated the debate, inaugurated by Javier Cremades, president of the WJA. During his speech, President Cremades stressed that “the energy transition is taking place in an unprecedented context in the 21st century. With the war in Ukraine, the conflict unleashed by Moscow, violating international law, has revealed the dependence of Europe and many other regions on Russian fossil fuels”.

During the debate, the panel agreed on the fact that the European Union is fully committed to the objectives of decarbonization by 2055, which implies a progressive abandonment of fossil fuels, and its total substitution by clean energies: renewables, green hydrogen, etc. The so-called energy transition process, which is currently taking place, will achieve a triple objective once complete: cheaper, non-polluting and self-sufficiency.

It was also mentioned that the war in Ukraine has highlighted the urgent need to eliminate the current EU’s energy dependence on Russia by 2030 at the latest, and if possible, by 2027.

Panelists also agreed that energy transition towards decarbonization and independence from Russia are not contradictory goals; on the contrary, they are mutually reinforcing. The most effective way to achieve European energy self-sufficiency is to accelerate the transition in all its dimensions: increasing the contribution of renewables, energy efficiency and savings, new technologies, and in particular, green hydrogen. This philosophy underlies the Commission’s Repower communication, which confirms and reinforces the general objectives contained in the Fit for 55’s communication, approved by the European Council.

The world is currently immersed in a global crisis, which goes beyond the war in Ukraine, and even beyond the post-COVID 19 pandemic. Panelists remarked that this situation poses major challenges to the energy transition process. For example, questions relating to the availability and cost of innovative technologies and that of the raw materials required; questions relating to the world economic situation, inflation, contraction, and growth; and of a geopolitical nature, the duration and extension of the conflict, de-globalization, and disruption of supply chains, etc.

The rise in energy prices is undoubtedly, and especially in its “energy poverty” dimension, one of the greatest causes for concern and a major challenge to the energy transition process. The panel agreed that corrective measures must be implemented, but they must not jeopardize either the progress achieved or the road ahead. The European energy market, as the data shows, has worked very effectively, particularly for consumers and to encourage investment in renewables. The current problem is caused by rising gas prices, and that must be solved with specific measures, targeted at vulnerable sectors.

The European Union began the energy transition process two decades ago, and has already achieved important results: in particular, the fulfillment of all the objectives set for 2020 and the positive forecast, even in anticipation, with respect to those of 2030. The EU has the most complete legislative tools and financial instruments in the world to achieve decarbonization by 2055. Although the current crisis presents significant risks, there is a conviction that the EU has the capacity to overcome them, even to accelerate the process.