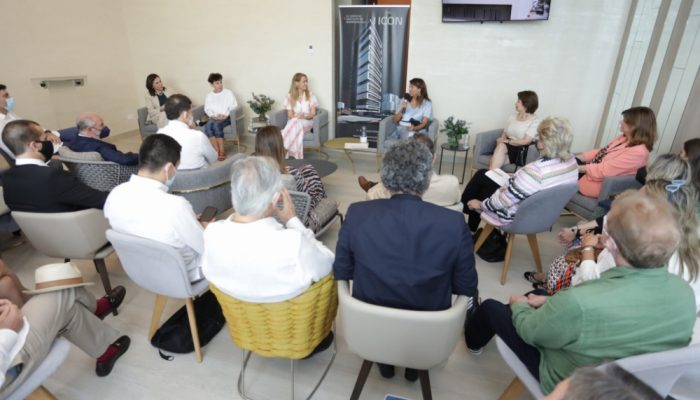 Mrs. María Juliana Ruiz, First Lady of the Republic of Colombia, moderated the panel “Women and consolidation of the rule of law” that served as a luxury appetizer for the XXVII World Law Congress held by the World Jurist Association in Barranquilla. The first lady assured that “we must build the future in a better way and do so through the law, which provides a legal, juridical, human and social framework.” And he stressed the importance of “teaching our girls the principle of equity, the fairness of everything based on respect, and that they do not have to learn more than anyone else, or be more than anyone, just be aware that they are part of a society and have rights and duties”. He added that in Colombia more than 50% of law students are women and more than 50% of those who practice are women, but less than 15% of them exercise the profession in managerial positions or with high salary, social or business recognition. “It seems paradoxical that having a majority of representation, we continue to be a minority in the ability to fully exercise it”, he added.

In this exclusive discussion for the media, the former Bolivian Minister of Foreign Relations participated during Janine Áñez’s term, Karen Longaric, who assured that she always tries to motivate her female students “so that they are encouraged to challenge that woman in a more secure way. deeply macho society and so that they can venture into different areas that have been a privilege for men, such as the judiciary, for example”. Along these lines, the first and only female president of the Constitutional Court of Chile, Marisol Peña Torres, recognized that “for 20 years until now the situation is much more equitable, since the new generations have learned to share the responsibilities of the home, and this point is important”. And he added that “it is not a fight or a claim against men,

For her part, the former president of the American Bar Association, Patricia Lee “Trish” Refo, pointed out the difficulty of being a woman and a lawyer in the United States, although she clarified that not impossible, despite the fact that it is the most common. In this regard, the president of the World Jurist Association (WJA) Spain and dean of the Barcelona Bar Association, María Eugenia Gay, highlighted that “in Spain there is a pyramidal structure in the field of justice that is alarming, because in the At the base, there is a majority presence of women and when ascending there is only a male presence, and that is why the necessary modernization of state structures is unquestionable”. At this meeting, which was presented by Manuel Aragón Reyes, academic director of the World Law Congress and emeritus magistrate of the Constitutional Court of Spain,

During this day, the WJA awarded its Medal of Honor to the First Lady, who acknowledged collecting it “on behalf of all Colombian women and those of all nations, who work to achieve this visibility and ability to fully develop”.

In addition, they were also delivered to co-organizers and sponsors of the congress. They were honored Wilson Ruiz Orejuela, President of the Organizing Committee of the World Law Congress Colombia 2021 and Minister of Justice of Colombia, Jaime Pumarejo Heins, Mayor of Barranquilla, Grupo Mutua Madrileña and Seguros del Estado, represented by Jaime Montalvo, and Francisco “Paco” Rodríguez collected the medal on behalf of The Icon, the tallest skyscraper in Barranquilla that precisely hosted this meeting with the media.

Rafel Puyol, president of the University of La Rioja, UNIR, Jorge Martí Moreno, president of the International Union of Lawyers (UIA), and María Eugenia Gay were also decorated. On Friday, December 3, during the development of the congress, the delivery of medals to other personalities and institutions will continue.