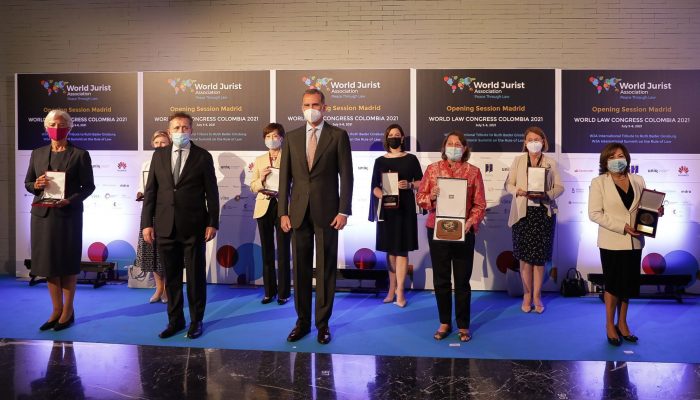 On the morning of Monday, July 5, Casa de América hosted the presentation of the Ruth Bader Ginsburg Medals of Honor promoted by the World Jurist Association (WJA) and the World Law Foundation (WLF) in recognition of those women who, during their careers, have promoted the rule of law and gender equality throughout the world. Together with Jane Ginsburg, this award was created, named after her mother and US Supreme Court Justice, who became the first woman to receive the WJA World Peace & Liberty Award in February 2020 from the hands of the WJA President and Spanish lawyer, Javier Cremades.

Nowadays, gender equality and the full incorporation of women in all relevant areas of society are an essential commitment for the maintenance of the rule of law, in part, due to the efforts of Justice Ginsburg, both during the 70s and throughout her entire career.

For this reason, during the first day of the Opening Session Madrid of the World Law Congress 2021, this distinction was awarded to eight women who, like Ginsburg, have fought throughout their lives for the defense and strengthening of the rule of law, peace and freedom in their countries, continents or worldwide.

The jurists who have received the Ruth Bader Ginsburg Medal of Honor this 2021 are:

– Christine Lagarde (France): President of the European Central Bank and first woman to preside over the International Monetary Fund (2011-2019). In France she held the positions of Minister of Agriculture and Fisheries, Minister of Commerce and Minister of Economy, Finance and Industry.

– Gilian Triggs (Australia): United Nations Assistant High Commissioner for Refugees since 2019, former Dean of International Law at the University of Sydney and President of the Australian Human Rights Commission (HRC) from 2012 to 2017.

– Rosario Silva de Lapuerta (Spain): Vice President of the Court of Justice of the European Union since 2018 and magistrate of the court since 2003. She was the first woman to access the Spanish State Bar in 1978; Head of the Legal Service of the State before the Court of Justice of the European Communities and Deputy Director General of Community and International Legal Assistance for the State General Attorney.

– Young Hye Kim (South Korea): She has served for more than 25 years as a senior judge in various courts and has been a permanent commissioner of the Korean National Human Rights Commission, and Vice President of the International Association of Women Judges.

“With the delivery of these medals, which will be done periodically, the World Jurist Association seeks to promote the recognition of women jurists, sometimes long forgotten, and their role in the world of law throughout history, as well as its economic, social and political impact. These are women who, without a doubt, have created value for society, for the world of law and, therefore, for the consolidation of democracy and the rule of law”, said Javier Cremades, president of the WJA.

On behalf of the winners, Christine Lagarde, president of the European Central Bank, celebrated the creation of these medals, “not only because they have been presented to us, but because it is a very effective way to honor someone who has done so many things, to promote positive change in the world”. And with the inspiration of Ruth Bader Ginsburg, Lagarde has highlighted that “the rule of law is the roadmap and lays the foundations on which the most modern constructions can be built”.

The selection of the recipients of the Ruth Bader Ginsburg Medal of Honor from the World Jurist Association has been in charge of a jury made up of renowned international personalities; chaired by Jane Ginsburg, daughter of Justice Ginsburg and professor at Columbia Law School, and composed of José Ramos-Horta, Nobel Peace Prize winner; María Encarnación Roca Trías, magistrate of the Constitutional Court of Spain; Viviane Reding, Vice President of the European Commission (2010-2014); Amanda Tyler, PhD in Law from Harvard University and co-author, with Ginsburg, of the book: “Justice, Justice Thou Shalt Pursue”; Elizabeth Magill, professor at Stanford Law School and former legal aid to Justice Ginsburg, as well as Rector of the University of Virginia; Javier Cremades, president of the WJA and the WLF; Albie Sachs, South African activist and former judge of the Constitutional Court, and Victoria Ortega, President of the General Council of Spanish Lawyers.