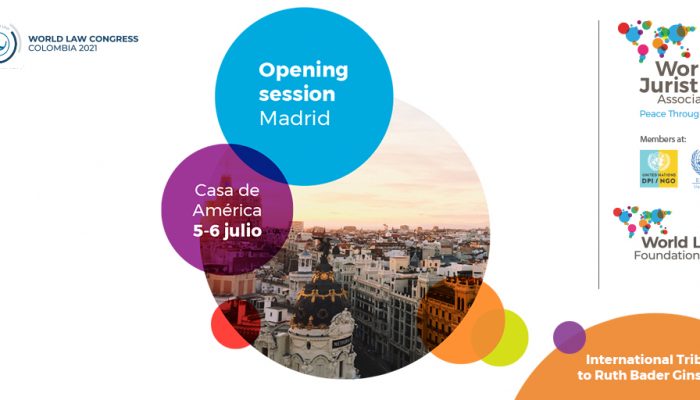 The World Jurist Association (WJA) and the World Law Foundation (WLF) will once again position Madrid as the capital of law with the celebration, during July 5 and 6, of an international meeting of jurists that will be attended by the world elite of law.

The acts of the first day will count with the presence of King Felipe VI of Spain and Iván Duque, President of Colombia. During this day, the international tribute to the recently deceased Justice of the Supreme Court of the United States, Ruth Bader Ginsburg, for her commendable defense of gender equality and civil rights throughout her life are recognized.

For the World Jurist Association, Ginsburg has been a visionary and strategic leader in ensuring that equality, fairness and the rule of law are not left in the theoretical realm, but rather positively impact social institutions and the lives of people. The Judge was the first woman to receive the World Peace & Liberty Award, an award given by the WJA,  considered to be the Nobel Prize for Law. This recognition was previously received by King Felipe VI during the World Law Congress 2019, and was also awarded to Winston Churchill, René Cassin and Nelson Mandela.

As part of the tribute to the Justice, the tribute “Mother, jurist and myth: I knew Ruth Bader Ginsburg”, the round table “Equality and the Rule of Law: contributions from international tribunals”, a panel that will bring together representatives of the most important supranational courts in the world for the first time in history. Similarly, in association with Jane Ginsburg, Professor at Columbia and daughter of the honoree, the Ruth Bader Ginsburg Medals of Honor will be awarded to eight renowned women jurists who have promoted gender equality during their careers, this year’s winners being: Christine Lagarde, Gillian Triggs, Luz Ibáñez, Maite Oronoz, Navi Pillay, Rosario Silva Lapuerta, Sujata Manohar and Young Hye Kim.

During the second day, the International Summit on the Rule of Law will be held, which will house presidents of supreme and constitutional courts of different countries, and prominent international jurists, who will discuss current issues on various discussion panels: “COVID regulations and their effect on citizens”, “5G: privacy and cybersecurity”, “Rule of Law in the XXI century”, “Independence of the judiciary in Europe and the Americas”, “Rule of Law in Mexico  and “Fake News and the Seizure of Newspapers: El Nacional Case”.

In this framework, the World Law Congress 2021 will be officially presented, which will pave the way to Colombia as the world capital of law. In the words of Javier Cremades, president of the WJA and the WLF, “our objective is to promote awareness of the importance of the rule of law in society and that is why we will continue to hold these events, in order to transmit our premise”.