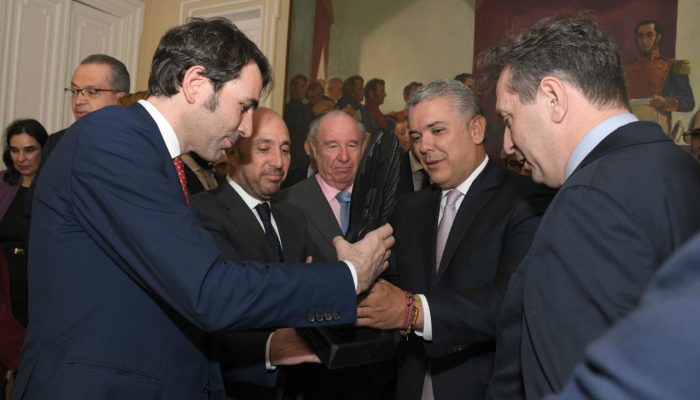 The International Summit on the Rule of Law held on July 6 at Casa de América with occasion of the Opening Session Madrid, organized by the World Jurist Association (WJA) and the World Law Foundation (WLF), has been the stage for the official presentation of the World Law Congress Colombia 2021.

The Congress will be held on December 2 and 3 in Barranquilla after reaching an agreement between both entities. The signing of the agreement was made effective with the joint signature of Javier Cremades, president of the WJA, and Jaime Pumarejo Heins, Mayor of Barranquilla. Pumarejo has described the host city as “welcoming, seeking reconciliation and understanding of its capacity to move forward.” He has acknowledged receiving the celebration of the World Congress of Law with “enormous illusion”, which, he states, “celebrates our democracy and our constitution.”

For his part, Luis Guillermo Plata, Colombian ambassador to Spain,  has assured “ to be a country that has orchestrated change in recent years and will respond well to the development of the Congress”. The country’s Minister of Justice, Wilson Ruiz Orejuela, president of the Organizing Committee in Colombia for this event, described the Congress as “a great challenge to which we will give the best of ourselves by making the participants’ stay the best”, and he recalled that the policy of Iván Duque, president of Colombia, “is that of a social state respectful of the law.”

Witness of the agreement reached, Arancha González Laya, former Minister of Foreign Affairs of Spain, has dedicated her speech to talk about the rule of law, institutions, and democracy, which she said are “the basis on which our countries are settled”. In this regard, she has specified that “we must be humble and recognize that these are only solid if we solidify them, and this is a responsibility that resides in the community that this Congress represents, because the builders of the rule of law are, in first place, us jurists”. Regarding the congress to be hosted by the city of Barranquilla in December, Laya has highlighted three ideas that she believes should be addressed: technology, gender equality and climate change.

International Summit on the Rule of Law

This second day of the Opening Session Madrid brought together presidents of supreme and constitutional courts from different countries, and prominent international jurists, who have debated current issues in different discussion panels: “Regulations related to COVID and its effect on citizens”, “5G: privacy and cybersecurity”, “The independence of the judiciary in Europe and America”, “The rule of law in Mexico”, “The evolution of the role of women in justice in the XXI century” and, finally, the Eisenhower Fellowships association presenting the First Amendment Award 2021.