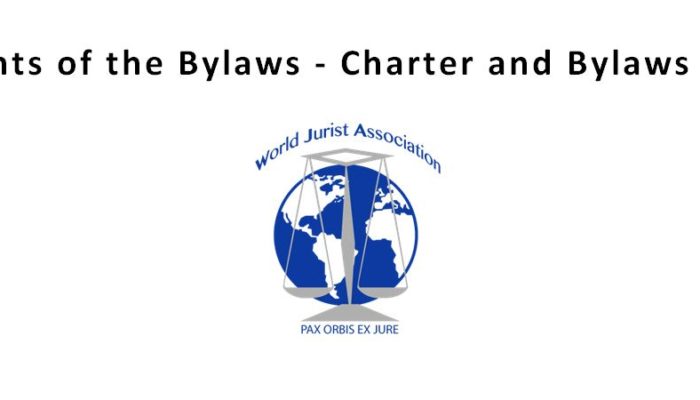 The Charter and Bylaws Committee, appointed on 3 July if this year, consisting of three members, all nominated by the board of governors, have revised and approved the proposal attached to this email to reform the structure of the World Jurist Association’s Bylaws.

Members of this Committee are:

The aim of such revision and reform of the bylaws responds to the need of giving better representation to different regions and the National chapters that integrate them in our organization. The target is based on the possibility to hold every year a major event for the World Jurist Association in a different region of the world. To achieve such purpose the many national chapters will be able to gather in Regional Forums:

Thus, every national chapter should gather in  Regional Forums, and each regional forum should appoint a President of the Forum. Each President of the Forum will be a member at the Inter Regional Directory, being appointed president of this modality the president of the regional Forum with a proposal for a conference or Congress that takes place in the range of five years and only within the limits of his or her chapter or regional Form. Vice President of this modality can also come with plans for a future international event and thus become president after the first two years of Rotary international presidencies have concluded, and a major event has been held by his or her inter-regional directories. This supra regional modality is thought to bring neighboring regions together with the aim of creating bonds of fraternity between their different countries and facilitating an atmosphere of international cooperation.

On the other hand they would have more autonomy to generate and use the funds raised by themselves (special foundations created by Regional Forums or National Chapters, with legal personality).

The list of Inter Regional Directories is the following:

West of North America and Alaska

All five Inter Regional Directories will gather in the Global Council of Presidents (GCP). Presidencies to this council will rotate every year depending on which President is responsible of holding the major event for the corresponding year. After the first two years of Presidencies are finished, the three presidents that have already carried out their event, may appoint there vice president as new president of the Inter Regional Directory and thus member of the Council of Presidents for the rest of the term.

The role of the Legal Counsel has also been revised by the Charter and Bylaws Committee so that he or she will be appointed amongst WJA senior members in good standing that are registered under any bar association of a US state.

If there was to be a law firm, member in good standing of the association with interest to present a candidate to this position, and the Legal Counsel seat was to be vacant, the candidacy could be evaluated and voted by the Council of Presidents.

We would like to give the opportunity to all our members to give us their feedback on these amendments so the Committee can adjust the approved proposal.

Please address your comments to wja@worldjurist.com