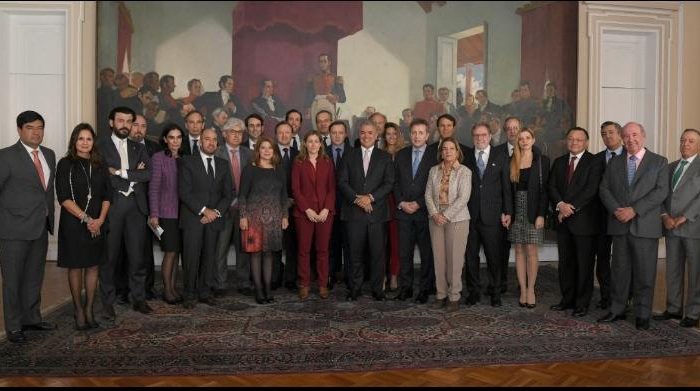 Representatives of the World Jurist Association and the World Law Foundation presented the World Law Congress before the President of Colombia, Iván Duque.  The upcoming Congress will be celebrated in Bogota and Cartagena de Indias, Colombia, on February 8-10, 2021.

The reception took place at the `Palacio de Nariño´ and was also attended by the Minister of Justice and Law of Colombia, Margarita Cabello Blanco, the Inspector General of Colombia, Fernando Carrillo Flórez, Juan Luis Cebrián, Founding Trustee of the World Law Foundation and President of Honor of El País of Spain, Martín Acero,  Managing Partner of PPU,  university authorities and other notable personalities.

In relation to the next edition of the World Law Congress that will place Colombia, President Iván Duque, pointed out that its celebration is a great recognition to the effort of all Colombians  defending the Rule of Law as a guarantor of freedom, order, peace and concord among themselves. Furthermore, Javier Cremades, president of the World Jurist Association and the World Law Foundation, described this congress as a “declaration of the international legal community to the commitment that the Colombian society has with the defense and strengthening of the Rule of Law and its institutions, in opposition to violence, as well as its effort to create a society of opportunities, freer and more just for all”.

During the World Law Congress 2021, the World Peace & Liberty Award will be presented to a distinguished personality. This award has been previously received by international jurists committed with the defense of the Rule of Law, such as Sir Winston Churchill, Nelson Mandela, René Cassin, King Philip VI of Spain,  and, recently, the Hon. Ruth Bader Ginsburg, Associate Justice of the Supreme Court of the United States.