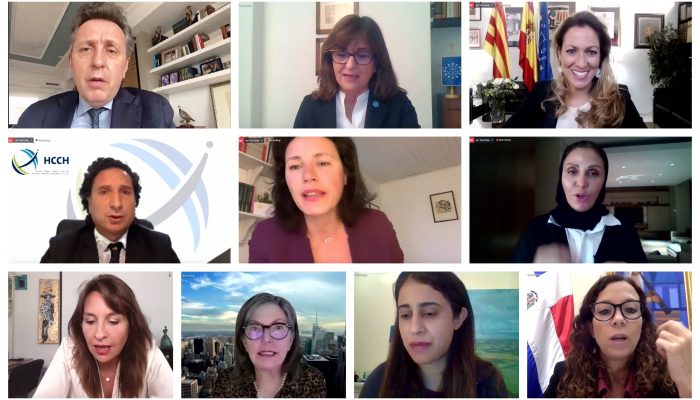 In collaboration with the European Bars Federation (FBE), the World Jurist Association (WJA) celebrated on February 25, 2021 the Opening Session Strasbourg of the World Law Congress Colombia 2021, focused on the importance of the Rule of Law in protecting minors in vulnerable situations, while maintaining their human dignity. Javier Cremades, president of the WJA and the World Law Foundation, opened the webinar by emphasizing that this is a very important area for the society, acknowledging that “if the rule of law is anthropocentric, the protection of families and children is essential”.

Under the title “The International Protection of Families and Children”, María Eugenia Gay, president of the WJA Spain and dean of the Barcelona Bar Association, moderated this debate in which Silvia Giménez-Salinas, president of the FBE, assured that “from its beginnings, the protection of children provided the administration with the necessary speed to protect a child immediately in the face of abuse or negligence, as we cannot allow procedural deadlines to harm them”. Along these lines, she pointed out that “family law and the protection of children has advanced thanks to European regulations”. However, she acknowledged that each State has its own independent regulations and has its own family law.

The same situation occurs in the United States where family law is statutory: “There is no American divorce law, for example,” acknowledges Pamela M. Sloan, chair of the NYC Bar Association’s Matrimonial Law Committee and Council at the International Academy of Family Lawyers (IAFL), who assured that, during these processes, children are given a voice. “The lawyer’s job is to advocate for the interests of the child, they have a confidential relationship, and the child does not have to be present at court because the judge can question them outside,” she said.

For her part, Dominique Attias, first vice-president of the FBE, was concerned about the cause of ghost children and wanted to pay special attention to these minors who are not registered, since, as she pointed out, “every minor must be registered at birth to have a legal identity”. Adding that “children whose birth is not registered do not exist in the eyes of their country’s governments, complicating access to their rights, health and education, which could even be denied to them”.

International child abduction is another problem related to the protection of children. Ignacio Goicoechea, representative of the Regional Office of the Hague Conference for Latin America and the Caribbean (ROLAC), called for “less rhetoric and more effective protection” to solve this issue since, he stressed, “what children need is to be protected”. Carolina Marín Pedreño, vice-president of the IAFL and former president of the Westminster and Holborn Bar Association (UK), also referred to this issue, pointing out that “the Hague Convention is a very good instrument to comply with the need for a child to be returned to his or her country of origin after having been abducted”. In addition, she highlighted the training of lawyers and recognized that “on occasions, we see children who have not been returned because the parent has declared that he or she is not aware of the existence of treaties that solve the situation”. In this sense, Diana Hamade, a lawyer from the United Arab Emirates and member of the IAFL, pointed out that “in many countries there are deficiencies when a parent takes a child away and the child is not returned to the other parent”.

Regarding child marriage, Dilia Leticia Jorge Mera, Vice Minister of Innovation, Transparency and Citizen Services of the Dominican Republic, stated that “it is a real situation of violation of human rights, since child marriage is carried out without the consent of children and adolescents, who are coerced by their families or by the social environment around them”. She also pointed out that “Dominican Republic and Nicaragua occupy the first place in Latin America with 8,000 minor girls and teenagers married between 2001 and 2019”.

For Pakistani lawyer Sulema Jahangir, member of the IAFL, the global culture of justice and equality could be used in benefit of minors in Pakistan where “judges try to help families and advance laws that are fairer for women”. She also highlighted the goal “to improve the lives of hundreds of women and families in Muslim countries”.

For Daniela Horvitz, president of AIJUDEFA (International Association of Family Lawyers) and governor general of the IAFL, giving children, young people and families the protection needed, also implies “an imperative need to standardize basic principles in relation to family law”.

This meeting has served as preview of the family law topics that will be discussed during the World Law Congress Colombia 2021, which will celebrate the 30th anniversary of the Colombian Constitution. Through the projection of an institutional video, the president of the host country, Iván Duque, has committed to “continue promoting the strength of the rule of law as fertile ground to allow growth and welfare, development and freedom of citizens” and has assured that “we will continue working to build a better future for all based on the strength and guarantees of the rule of law”. 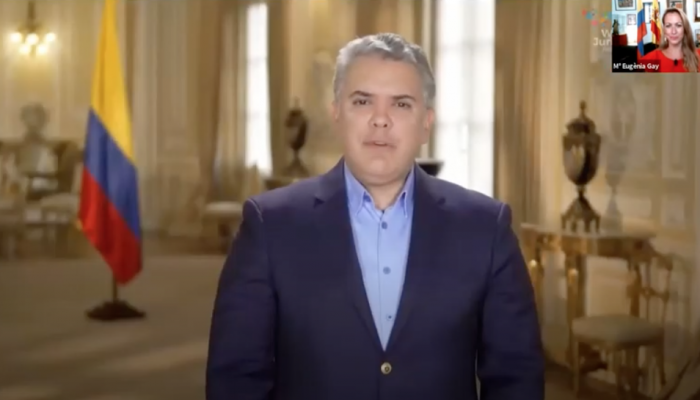 The President of Colombia, Iván Duque, chaired the online opening ceremony of the 27th edition of the World Law Congress, organized by the World Law Foundation and the World Jurist Association. He participated through an institutional video in which he acknowledged that “it is an honor for Colombians to host this congress in recognition for the efforts of the Colombian society to defend the Rule of Law as a guarantor of freedom, order, peace and harmony, precisely as we celebrate the 30th anniversary of the Colombian Constitution of 1991, and the bicentennial of the promulgation of the Constitution of Cucuta”.

Duque underlined the relevance of the World Law Congress and shoed the importance of “strengthening these valuable dialogues and reflections”, as well as applauding the “innovative” design of this on-going congress that will be carried out through fourteen Opening Sessions “aiming to promoting the strength of the Rule of Law, as fertile ground to allow growth and well-being, development and freedom for our citizens”.

Looking ahead to November 17 and 18, 2021, the date on which the congress will be held in Colombia, the president has sent “my most sincere welcome to our country, where we will continue working to build a better future for all, based on the strength and guarantees of the Rule of Law.

The Colombian Minister of Justice and Law, Margarita Cabello, also took part in the presentation of WLC 2021 and coincided with the President of her country in recognizing the enthusiasm of hosting the World Law Congress: “It is a tribute and recognition of the effort that Colombia and we Colombians are making in the struggle to strengthen the rule of law as a guarantee of freedom, peace, order and democracy”. His counterpart in Spain, the Minister of Justice Juan Carlos Campo, recognized that “we must endeavor to organize seminars as essential as this one, creating an extensive network of jurists who contribute to strengthening the separation of powers, judicial independence, the defense of human rights, pluralism, equality and freedom at all costs”.

In view of these words, Javier Cremades, President of the World Law Foundation and the World Jurist Association, reinforces that this congress, in its entirety, “wants to be recognition by the international legal community of the commitment of Colombian society to build and consolidate a society of opportunities, freer and fairer for all”.

The President of the WJA Spain and Dean of the Barcelona Bar Association, Mª Eugenia Gay, who hosted the opening ceremony, stressed that “the latest challenges that have arisen have shown the importance of countries working together, because there are problems that go beyond borders and need the commitment of governments and civil society”. As Manuel Aragón, academic director of the WLC and emeritus judge of the Spanish Constitutional Court, said, “We can only come out of this crisis if we, jurists, do not forget that the Rule of Law is a demand that we can never renounce to”.

Will the rule of law survive in Europe?

The 27th World Congress of Law has launched a new format in which 14 online sessions will be held as prelude to the most important international legal event. The first of these, under the name “Will the Rule of Law survive in Europe?” was moderated by Viviane Reding, Vice President of the World Law Foundation and former vice-president of the European Commission. Other speakers included Hanna Suchoka, Founding Trustee of the World Law Foundation and prime minister of Poland (1992-1993), François Biltgen, judge of the European Court of Justice and minister for various portfolios, Rainer Arnold, member of the Advisory Council of the World Law Foundation and professor at the University of Regensburg, Marie-Aimée Peyron, Dean of the Paris Bar Association (2017-2019) and Andre Alen, President of the Belgian Constitutional Court.