In its third year of operations, the World Law Foundation counts on more than 50 members of the Board of Trustees and the Advisory Board, all aligned to achieving the same objective: to promote the Rule of Law throughout the World. Distinguished personalities from all around the world have been collaborating in the governance and administration of our Foundation, created to also support the tasks carried out for almost 60 years by the World Jurist Association, including the World Law Congress, and the granting of the World Peace & Liberty Award and the Ruth Bader Ginsburg Medals of Honor, and other events and campaigns to promote Peace Through Law.

The Foundation is committed to promoting and disseminating respect for the law as instrument for the defense of world peace in international relations between States and Regions.

To date, the members of the World Law Foundation Board of Trustees are:

The members of the Advisory Board are: 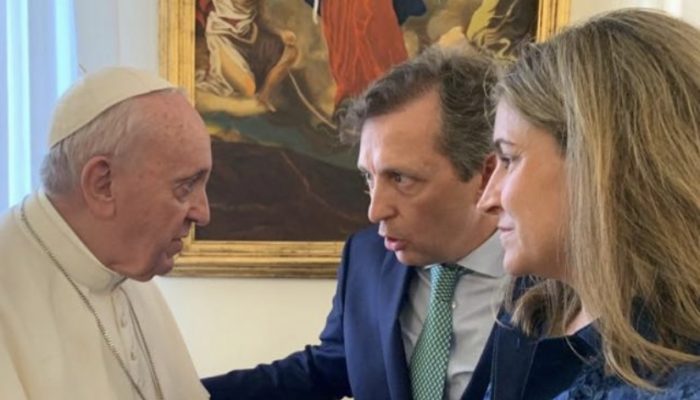 During this audience, WJA Worldwide President presented a WJA gold medal recognition to His Holiness for his “contribution to Peace through Law in the World, reaching far beyond what Justice demands”, and thanked him “for promoting a freer world”.

Likewise, on August 23, our Worldwide President recognized Lucio Ghia, WJA President 1995-1997, with the WJA gold medal for his “contribution to Peace through Law in the World” and for his “outstanding work as President of the World Jurist Association”.

“A WORLD RULED BY LAW, NOT FORCE” has been the World Jurist Association’s mission since its founding in 1963. The WJA was formed in response to an international outcry for a free and open forum where judges, lawyers, law professors and other professionals from around the world could work cooperatively to strengthen and expand the Rule of Law and its institutions throughout the world.

As a non-governmental organization with special consultative status at the United Nations Economic and Social Council, the WJA provides a unique forum for the international community. We have worked closely with governments, non-governmental organizations and international associations to foster a cooperative dialogue on world peace. Through our support, decision-makers from around the world work together as individuals, rather than representatives of a particular country, class or ideology.

With more than 55 years of accomplishments, the WJA is one of the few organizations working with such a broad range of stakeholders to promote the Rule of Law as the path towards world peace. Our members include sitting and retired Chief Justices, judges, government officials, law professors, lawyers, law students and law-related professionals. We have National Presidents in countries around the globe, and our Board of Governors represents every continent and aspect of the legal profession.

This is a brief look at the ways in which the WJA has sought to build the foundation for a system of laws that will ensure peace without the use of force. The WJA is committed to its continuation of ensuring peace through the Rule of Law for all generations.

Beginning with the first Congress on the Law of the World, the WJA has achieved many remarkable successes. The congresses continue to provide a forum where individuals from all nations and all areas of the legal profession can gather to exchange ideas and experiences. The results of this dialogue, expressed in the resolutions drafted by each Congress Resolutions Committee and approved by all delegates, is one of the most concrete and enduring accomplishments of the congresses.

Every two years, members of the legal profession are given the opportunity to call upon Heads of State and Governments to recognize these resolutions and act accordingly. The numerous messages received from these Heads of State and Governments, in support and encouragement of the congresses, indicate the value placed upon the resolutions that come out of the Biennial Congresses. By tradition, our Congresses have been Honorary Presided and addressed by the highest authority of the host country.

Since 1965, Charlie Rhyne, founding president of the World Peace Through Law Center, established as our association’s policy to recognize outstanding worldwide personalities of the legal and human rights-defense field with the WJA Awards. Prime Ministers, Presidents, Ministers, Magistrates, Prosecutors, Judges, Academics, Lawyers, Directors of international organizations and outstanding WJA Members who have widely contributed to the achievement of the organization’s goals, have been awarded by the nowadays World Jurist Association.

The establishment and celebration of World Law Day is another accomplishment of the WJA. President Lyndon B. Johnson of the United States was the first Head of State to recognize the World Law Day. Chief Justice Kisaburo Yokota from Japan, the first Honorary World Chairman of World Law Day, remarked, “The lawyers of the World have marked another important milestone in their struggle toward the great goal of international peace.” Justice Yokota went on to say that the World Law Day calls upon the entire world to re-evaluate the place of law in the community of nations and to re-instill in our way of life the rule of law as an ultimate assurance of world peace.

The International Demonstration Trial, another tradition started by the WJA, began in 1971. During the demonstration, hypothetical cases are argued by lawyers from various countries before a panel of Chief Justices of the world. These Demonstration Trials have shown the possibility of replacing war with law, as the proper forum for decision making on international disputes. The Demonstration Trials give judges a time and place to express their great value to the peace process on a regular biennial basis.

CONGRESSES ON THE LAW OF THE WORLD

HEADS OF STATE AND GOVERNMENT WHO HAVE ADDRESSED WJA CONGRESSES

Most of the Congresses on the Law of the World have had the distinct honor of being addressed by the Head of State or Government of the host country.  Some of the most prominent inaugural addresses given include:

The Heads of State and Government have referred to the important role of the WJA in strengthening the rule of law in all nations through personal messages sent to our delegates during their work at the Congresses on the Law of the World.

In 1957, when the original concept for the World Jurist Association was envisioned, Sir Winston Churchill of the United Kingdom praised the program and its goal of strengthening international law and its institutions.

President Dwight Eisenhower of the United States praised the creation of the World Jurist Association and recognized the need for such an organization by stating, “The world no longer has a choice between force and law; if civilization is to survive it must choose the rule of law.”

His Holiness Pope John Paul II placed himself firmly behind the WJA’s program in his Homily at each of the private audiences of the WJA membership in 1979, 1985, 1992, and 2004, attended by judges and lawyers throughout the world.

In June 1993, H.E. Archbishop Jean Louis Tauran, Secretary of State of the Holy See at the Vatican, signed an accord establishing permanent relations between the WJA and the Vatican.

Since its establishment, the WJA has hosted numerous conferences, specializing in a specific topic of interest to the legal professionals invited.  Some of the most recent include:

The previously mentioned accomplishments are perhaps the most important reasons for an individual to join the WJA.  By joining the WJA and participating in its congresses and conferences, an individual is proclaiming his or her support for world peace.

While the WJA and the world have progressed significantly in the past 40 years, there is much work to be done if we are to ensure a peaceful, stable, and rich life for all generations and all peoples.  WJA members are recognized by world leaders as persons of great intellect and insight into the needs of both the legal and non-legal community.  They are often the ones to whom these decision-makers turn to for advice on how the legal profession can further strengthen world peace.

The importance of coordinating the efforts of legal and non-legal professionals has been recognized in the creation of the World Business Associates.  This branch of the WJA encourages individuals from other disciplines to take an active role in developing practical strategies for global cooperation.

The WJA, as a non-profit organization, depends on the support and participation of its members; without this, the work begun in 1963 could not continue its advances toward a world ruled by law, not force.

Membership entitles individuals to several benefits.  Subscriptions to WJA publications and registration for events are substantially reduced for members.  Advance registration opportunities allow members to secure their participation and attendance at each event before other legal professionals are invited.  Members have full access to the resources and support of our headquarters office and the members of the Board. The WJA officers assist members with research projects, job searches, and international networking. Additionally, members are invited to submit articles of interest to the world community for publication by the WJA. Members of the WJA are also able to participate and deliver speeches at UN side events on behalf of this organization.

WJA active members are invited to participate in the elections of the Board of Governors and other official positions.  Members of the WJA may nominate other members, run for positions themselves, and vote in these elections.  Our Board of Governors is comprised of prominent jurists from around the world, and the opportunity to participate in this open, democratic process is one of the most significant advantages of the membership.

Several hundred work papers have been published and distributed over the past 40 years.  Entire sets are available for your collection.  Alternatively, individual papers may be ordered by author, title, or conference year and topic.

Membership Brochure to print on A4 paper