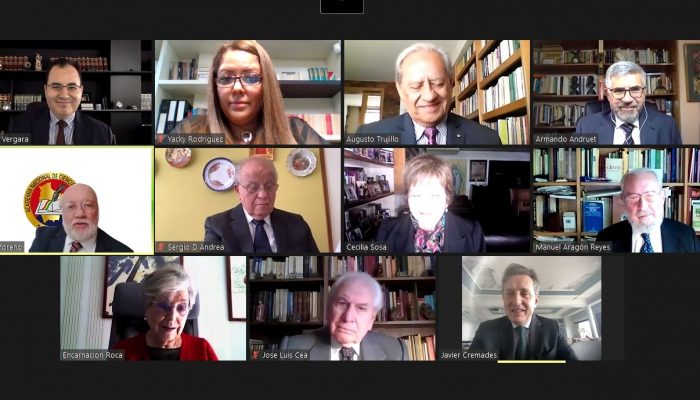 The World Jurist Association (WJA) and the Permanent Conference of Ibero-American Jurisprudence Academies have organized the debate “The Distortion of the Economic & Social Constitution”, moderated by Ramiro Moreno Baldivieso, president of the National Academy of Legal Sciences of Bolivia. This meeting has brought the main representatives of the Ibero-American academies of jurisprudence together virtually and has become the eleventh Opening Session of the World Law Congress Colombia 2021.

Augusto Trujillo, president of the Colombian Academy of Jurisprudence, has recognized that “the rule of law supposes freedom for economic activity and for private initiative, but without forgetting the responsibilities of the social state.” In this sense, he assured that “the law has to be a true guarantee of coexistence”. Javier Cremades, president of the WJA and the World Law Foundation (WLF), has reinforced this position, assuring that “if we want rule of law, we have to work towards it and make sure that there is no distortion or destruction of the Constitution, for which it is essential to identify when threats and attacks on the rule of law begin to be created”. Manuel Aragón Reyes, academic director of the World Law Congress, emeritus magistrate of the Constitutional Court of Spain and member of the Royal Academy of Jurisprudence and Legislation of Spain, also made reference to this, stressing that “when the rule of law is distorted, the social state is harmed”.

For his part, Bernardo Fernández del Castillo, president of the Academy of Jurisprudence of Mexico, has underlined the relevance of transferring what the rule of law implies: “it is seldom understood by the general population because they do not have a clear concept of what it can encompass, implying respect for the legal order in the legislative hierarchy of each country”. He also stressed that “it entails absolute respect on the part of the human rights authority and has the obligation to ensure that this is respected.” However, Mario Castillo Freyre, director of Conferences of the Peruvian Academy of Jurisprudence, believes that “[Peruvian] society has accepted the falsification of political organizations.”

Encarnación Roca, vice-president of the Constitutional Court of Spain, has placed special emphasis on the protection of children in the rule of law and has recognized that “we must try not to leave the interest of the minor only to a programmatic declaration”, and in terms of child exploitation, pointed out that “work prevents children from having a healthy childhood, a full childhood and a safe environment.” In addition, she highlighted the importance of minors knowing what democracy is, because otherwise, she assured, “they will not be able to live in a rule of law.”

Cecilia Sosa Gómez, president of the Supreme Court of Venezuela (1996-2000) and member of the Academy of Political and Social Sciences of the country, has analyzed how the constitutional distortion of economic rights occurs: “we are experiencing turbulence associated with the Venezuelan political process and the impossibility of solving the problem in light of the Constitution is due to the fact that the 1999 text has been a mere facade for the tempters of power and the opposition elites have had a purely political vision of the problem and not constitutional or institutional, nor economical either”.

Along these lines, José Luis Cea Egaña, president of the Chilean Academy of Jurisprudence, has commented “with uncertainty and some hope” the problem that his country is currently going through. “Although we are close to voting on a new Constitution, we are going through a process of deconstitutionalization in which the phases of the legal system are being violated and there is an environment of misrule along with vandalism where society is being neglected by the State, which is weak, fragile and does not serve the human person”. In his speech, Sergio D’Andrea, president of the Brazilian Academy of Legal Letters, explained how the Amazon has become a lost paradise within the framework of the distortion of the social and economic Constitution.

For his part, Rafael Vergara, former director general of the Bolivian Tax Authority and the country’s Academy of Jurisprudence, has focused on debates such as those involved in the opening sessions: “we jurists must guide these meetings so that these decisions which distort the nature of constitutional control and the essence of the defense of minorities and the rule of law, do not repeat themselves in another part of Latin America”. And for Armando Andruet, president of the Academy of Jurisprudence of Cordoba, “the best laws make citizens better and they deserve to have judges who judge with broad scientific capacity and a dignity and ethical commitment.”

This has been the eleventh day of the series of opening sessions prior to the World Law Congress to  be held in Colombia this year, making it coincide with the 30th anniversary of the Colombian constitution. Through the projection of an institutional video, the president of the host country, Iván Duque, has pledged to “continue promoting the strength of the rule of law as fertile ground to allow the growth and well-being, development and freedom of citizens”, and has assured that “we will continue working to build a better future for all based on the strength and guarantees of the rule of law”.