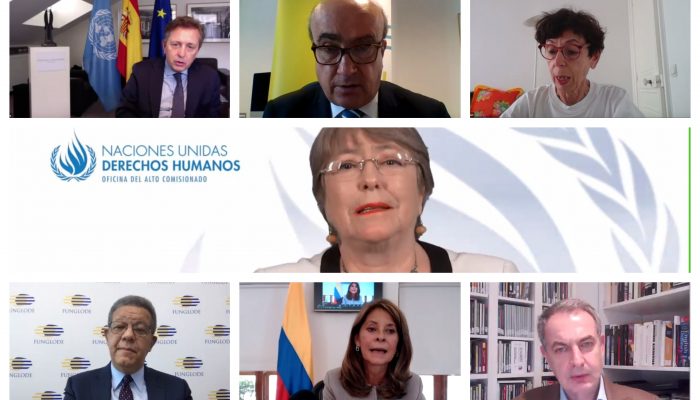 “Human rights education is vital to promote participation in inclusion, cooperation and solidarity; it fosters understanding and prevents violence and, as such, it should be treated as an investment in the future that should not be optional”. This is how Michelle Bachelet, United Nations High Commissioner for Human Rights and former President of Chile, has defended the need to promote and respect human rights through education. She has done so during the Lisbon Opening Session organized by the World Jurist Association and the Organization of Ibero-American States for Education, Science and Culture (OEI), as a prelude to the World Law Congress Colombia 2021.

Bachelet has recognized that all citizens should be able to «have the assurance that we are all equally deserving of dignity, respect and justice, without discrimination.» Corroborating her words, Mariano Jabonero, Secretary General of the OEI and co-organizer of the event, has assured that “every child has the right to have rights and, although it has not always been a maxim defended in schools, the objective is that the educational system assumes this task as fundamental and as a priority”.

Marta Lucía Ramírez, Vice-president of Colombia, also participated in the conference, considering the need for more institutions committed to prevention, investigation and punishment: “strengthen the institutional framework and talk about justice in relation to human rights and the capacity of the state to prevent actions violating against such and to punish said violations”. He has also assured that «in the Government of Colombia we prioritize respecting and guaranteeing human rights within the framework of the law» because, as he adds, «human rights violations are the cause of conflicts later in the future and we have to ensure that all citizen actions are aimed at sustainable peace”.

The former President of the Government of Spain, José Luis Rodríguez Zapatero, is committed to equality between men and women to achieve human rights in all parts of the world: “it is the great transforming force”. «The most advanced countries are those in which women enjoy the same rights as men in real terms and where the values ​​of coexistence in equality, which generate peace, dialogue and understanding, are those that spread within society», he added.

For his part, Leonel Fernández, former President of the Dominican Republic and President of the Fundación Global Democracia y Desarrollo (FUNGLODE), has recognized that “much progress has been made in Ibero-America, through its constitutions, regarding the construction of a democratic state under the rule of law, but we must advance in confronting crime and impunity to consolidate democracy and the defense of human rights”.

In charge of moderating the debate was Elisabeth Cassin, patron of the World Law Foundation (WLF) and former Vice President of Orange UK, who stressed that “human rights must be positioned above the interests of States and set education as an integral part of this objective”. In this regard, Javier Cremades, President of the WJA and the WLF, has ruled that «human rights education is a debt that each generation owes to the next.»

This meeting has summed the tenth session prior to the World Law Congress to be held in Colombia later this year, making it coincide with the 30th anniversary of the Colombian constitution. Through the projection of an institutional video, the President of the host country, Iván Duque, has pledged to “continue promoting the strength of the rule of law as fertile ground to allow the growth and well-being, development and freedom of citizens» and has assured that «we will continue working to build a better future for everyone based on the strength and guarantees of the rule of law. »