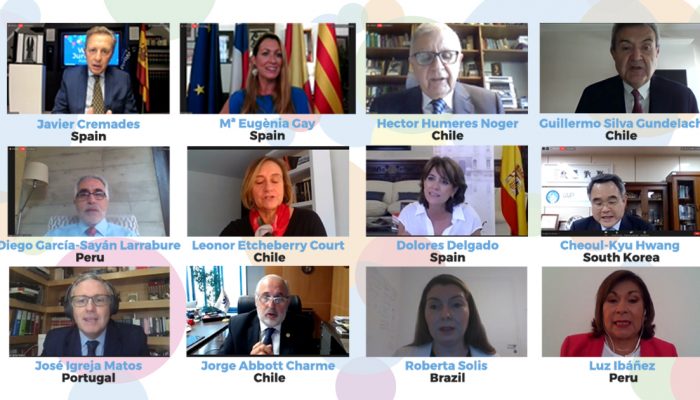 The President of the Supreme Court of Chile, Guillermo Silva Gundelach, participated in the Opening Session Chile of the World Law Congress Colombia 2021, titled ‘Transnational Crime and Corruption: Protecting Judicial Independence’. Silva Gundelach stressed the importance of discussing corruption and the protection of judicial crime, since “if we do not do so, we put our common future at risk”.

The meeting was chaired by Javier Cremades, president of the World Jurist Association and the World Law Foundation, who welcomed the speakers, stressing “how important the independence of judges is, as well as the fight against crime and corruption”. Organizer Diego García-Sayán, UN Special Rapporteur on the Independence of Judges and Lawyers and President of the Inter-American Court of Human Rights (2010-2014), introduced the topic and highlighted its importance since “the strengthening of organized crime networks has generated a new type of challenge and threat to the judicial independence of the powers”.

Leonor Etcheberry, Vice President of the Chilean Bar Association, has been in charge of moderating the debate in which Cheol-Kyu Hwang, President of the World Association of Prosecutors, has defended that “we are doing our best to apply the conventions against corruption” and has pointed out that international cooperation is fundamental, as well as ensuring that prosecutors’ offices work collaboratively beyond the traditional framework. During the discussion, the Attorney General of Spain, Dolores Delgado, bet on the functional and budgetary autonomy of the judiciary and the Public Prosecutor’s Office in order to confront corruption, which she considers “the dirty game of democracy” and highlighted the need to resort to cooperation as the tool to tackle impunity.

María Eugenia Gay, President of the WJA Spain and Dean of the Barcelona Bar Association, ratified the “firm commitment” of the group to make law and the laws the safeguard of citizens’ rights. As she highlighted, political parties and the different public powers must act with transparency and rigor in favor of society, so that the political formations are capable of redirecting the deviation of power and recovering the institutions they represent, the people, reinforcing the sovereignty of the states. The great challenges ahead demand the development of the structure in which dialogue is the maximum expression of democracy.

In this line, Héctor Humeres Noguer, President of the Chilean Bar Association, assured that “it is the responsibility of all the powers and ministries, in addition to the bar associations, to contribute to the prevention, eradication and information about the dangers of corruption and the forms in which it may appear”. For Humeres Noguer, “corruption can deteriorate the basis of a country causing severe damage to society, because the corruption that falls on the administration of justice affects the guarantee of human rights protection”.

Jorge Abbott Charme, National Prosecutor of Chile and President of the Ibero-American Association of Public Prosecutors, believes in the autonomy and independence of public prosecutors’ offices and promotes the use of international cooperation tools. During the debate, Luz Ibáñez, Judge of the International Criminal Court, recognized that “the problem of corruption and judicial independence does not respond to the individual conduct of judges, but rather it is a structural problem and therefore the response must be holistic and structural”.

In his intervention, José Igreja Matos, Vice President of the International Union of Judges, explained that it is always clear that the domestication of judges is a fundamental tool to promote impunity, and he highlighted the role of the multiple institutions that play a decisive role in the defense of the rule of law. “Difficult times demand a firm and courageous voice from international institutions”.

Roberta Solis, Judicial Integrity Team Leader from the United Nations Office on Drugs and Crime, closed the debate, stressing that “support among judges is fundamental because it helps prevent judicial corruption.

This Opening Session was the second session prior to the World Congress of Law to be celebrated in Cartagena de Indias on November 17-18, 2021. The President of Colombia, Iván Duque, participated in this session via institutional video, in which he assured that his country “receives this congress as recognition to the efforts of the Colombian society to defend the rule of law as a guarantor of freedom, order, peace and harmony”.