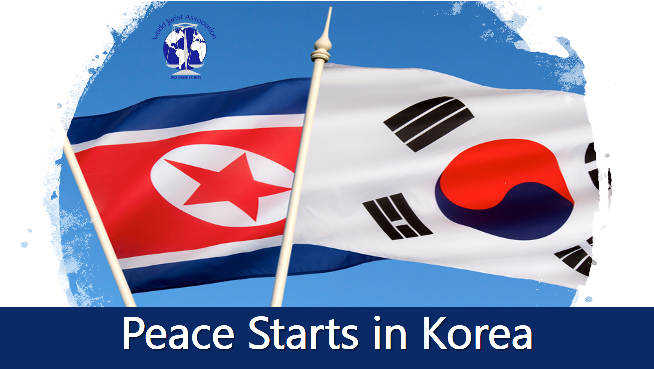 When Jesus delivered the Sermon on the Mount: “Blessed are the peacemakers, for they shall be called children of God”, among other Beatitudes, he did not specify whether that message was addressed to Jews, Samaritans, Romans or his own followers. Everyone, without distinction. And then, I would add, to ratify that they are concepts that march together: “Blessed are they who are persecuted for the sake of righteousness, for theirs is the kingdom of heaven“.

That is the humble way in which here on Earth we have been working for 40 years at the World Peace Through Law Center, founded in 1965, today World Jurist Association (WJA); without distinctions, exclusions, privileged inclusions, or discriminations. The WJA seeks to strengthen and promote the rule of law and spread peace through law; a recognition of the inherent dignity and equality of inalienable rights of all the members of humanity, founded on freedom, justice and peace in the world, as established in the Preamble to the Universal Declaration of Human Rights (UDHR), approved by the General Assembly of the United Nations (Article III of the WJA Charter).

As WJA Worldwide President for third time, I have committed in the pursuit of our objectives, traveling to different places in the world to actively attend international and regional conferences, among other activities, organized by individuals, associations, corporations, non-governmental organizations and governmental institutions with similar leitmotiv. The cooperation extends to all branches of law: judges, academics and lawyers. We cannot become judges and discriminate those who work for peace, either co-religionists or not, because, in the end, our north is to maintain the inherent dignity of every human being in the process of achieving peace and justice.

Under that mandate and with deep conviction of pursuing a realistic world peace, I attended the invitation of the HWPL (Heavenly Culture, World Peace, Restoration of Light) in Seoul, Republic of Korea, in 2015, to prepare a document that initially was meant to be an international treaty for the promotion of peace and disarmament, with a view to the cessation of wars. Considering the difficulties of achieving such purpose, legal complexity, multiple political interests in the international scenario, especially in the formation of instruments legally binding the community of United Nations States Members, the International Law Peace Committee (ILPC) was created.

I accepted to integrate this Committee, and, within our mission, we achieved our goal after multiple meetings and discussions. A consensus was reached in a document of 10 articles and 38 clauses, called “Declaration of Peace and Cessation of War” (DPCW). The fundamental spirit is the same one that the WJA shares, just governance based on law, not power. Exactly, the same basic concept devised by Sir Winston Churchill when he was presented with our project for a center for peace: “Contribute firmly, from civil society, to strengthen the rule of law“. We were convinced that the future of immediate world peace was being played in Korea.

Or in the words of the inspiring Dwight Eisenhower on our first conference in Washington, by supporting the creation of today’s WJA: “The world has no choice between force and law: if civilization tries to survive it must choose the force of the law“.

This year we attended for second time to Seoul, the peace of the world was centered in those precise moments and territories, between the two Korean countries, with the United States and Russia behind; more precisely, Trump and Putin. Those of us who share the experiences of the Americans and follow the daily news on the media, perceive the almost imminent spectrum of war and, with us and our family, tens of millions more. Imagine how the consequences would be like in North and South Korea. The ILPC finally signaled a laudable solution to the manifest impossibility to obtaining a consensus at the UN General Assembly, as the DPCW restricted the powers of the States and imposed them obligations, which is not realistic at this time of a new international cold war: “Recognize with merit the excellent progress of the President of HWPL in bringing together individual States and regional organizations around the DPCW. Also, recommend that this process will continue until sufficient support is obtained for the presentation of the DPCW before the UN GA with a view to its endorsement in the form of a resolution approved within it“. It is not small thing.

On September 18, I had the historic opportunity of visiting the demilitarized zone. Today, just a few weeks later, in the process of dismantling. Something similar happened in Berlin, when the WJA held a Congress promoting the disarmament and unification of the two Germanies. It is gratifying to contribute, even with a grain of sand.

The UDHR is not an international treaty, it is what it is, a statement of great weight accepted by the entire international community, and that was decided in 1944, when realist legislators realized that it was not possible to obtain a consensus of the main countries for a treaty on fundamental rights, hence decided to produce three instruments. First, the Declaration, not legally enforceable, even though today, after 70 years of validity in international doctrine, it is given a weight of customary law. Subsequently, the International Covenant on Civil and Political Rights and the International Covenant on Economic, Social and Cultural Rights (ICCPR and ICESCR, respectively) were produced. Both were adopted by the UN GA through Resolution 2200 A (XXI) of December 16, 1966, entered into force on March 23, 1976, and have been ratified by 167 States. These two Covenants have a value and can be legally binding among the countries that signed and ratify them.

It is our purpose in the immediate future to extract some fundamental political rights from the DPCW and incorporate them as an amendment to the Covenants. Furthermore, a review of the 30 Clauses or rights of the UDHR. Likewise, we are going to support an initiative of Unite for Rights, a human rights association that is trying to produce a Bill of Rights, to unify the existing human rights legislation in the world, in a simple, accurate and integrative way.

Now, after being sure that the war in the Korean Peninsula is moving away by leaps and bounds, we want to dedicate ourselves to work for peace in Venezuela and continue with the preparation of the XXVI Congress of the WJA in Madrid, to be held from 18 to 20 February 2019