Skip to content
World Jurist Association > About the WJA > Opening Session Caracas: Distortion of the Rule of Law 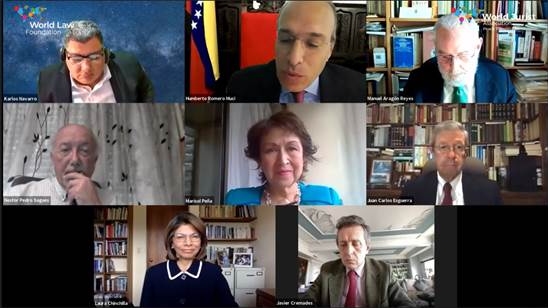 Together with the Permanent Conference of Ibero-American Legal Academies (CPAJI in Spanish), the World Jurist Association (WJA) organized this preliminary session of the World Law Congress Colombia 2021, which has taken up the importance of underpinning the Rule of Law to ensure human dignity:

“It must be cared for and protected from constant threats and must always lead to justice and equity, because the only guarantee of freedom and peace is submission to the laws, not to the rule of force.”

During the opening, representing the CPAJI, Augusto Trujillo, Professor of Constitutional Law and President of the Colombian Academy of Jurisprudence, pointed out that “the rule of law is a guarantee of coexistence and, if this is not the case, we are facing a state of arbitrariness with laws”.

Humberto Romero Muci, Professor of Financial Law at the Andrés Bello Catholic University and President of the Academy of Political and Social Sciences of Venezuela, was the host and moderator of this debate titled “Falsehood of the Rule of Law”. He highlighted the situation in Venezuela and described it as “dramatic” due to the “dysfunction of democracy and the systematic violation of the Rule of Law suffered by Venezuelans”.

“There has been a disfigurement by those governing who come to power determined to use and adulterate the institutions for their own benefit, with the aim of undermining the balance between the different government bodies”.

These statements were endorsed by Karlos Navarro, professor at the Universidad Santo Tomás, director of the Ibero-American Institute of Higher Studies (IIES) and president of the Academy of Jurisprudence and Legislation of Nicaragua, for whom “the authoritarian model in Latin America has the capacity to resist, mutate and survive, developing mostly in poor societies lacking democracy”.

For Allan R. Brewer-Carías, professor emeritus of the Central University of Venezuela and member of the Academy of Political and Social Sciences of Venezuela, the Rule of Law implies seven principles: constitutionalism, democratization, deconcentration of power, legality and judicialization, decentralization of power, primacy of human rights and civil government.

This position is shared by Laura Chinchilla, president of Costa Rica (2010-2014), who emphasized that:

“the rule of law is the most important guarantor of democracy against those who exercise power, and therefore is the favorite prey of politicians with weak democratic convictions, because it stands in the way of their will or the ends they pursue and the rules”.

For his part, Néstor Pedro Sagües, Professor Emeritus of the University of Buenos Aires and Member of the National Academy of Law and Social Sciences of Buenos Aires, pointed out that “a country whose Congress becomes a factory of institutional laws contributes to significantly diminish the normative force of the Constitution”.

Along these lines, Manuel Aragón Reyes, academic director of the World Law Congress, professor emeritus of the Universidad Autónoma de Madrid, magistrate emeritus of the Constitutional Court of Spain and member of the Royal Academy of Jurisprudence and Legislation of Spain, warned about the risk posed by the abusive use of emergency legislation, “what we know as a decree-law”. And he highlighted the obligation that jurists have:

“to protect the Rule of Law, to denounce its breaches and to contribute with our voices to confront situations of real distortion”.

Marisol Peña, first woman president of the Constitutional Court of Chile (2013-2014), minister of the Chilean Constitutional Court (2006-2018), university professor and member of the Chilean Academy of Social, Political and Moral Sciences, highlighted the work carried out by the Ibero-American Academies of Jurisprudence within the World Law Congress, inviting virtual attendees to the next Opening Session Córdoba, which will also be organized by the Ibero-American academies.

This is the eighth session preceding the World Law Congress Colombia 2021, which coincides with the 30th anniversary of the Colombian constitution. Through the projection of an institutional video, the president of Colombia, Iván Duque, promised to “continue promoting the strength of the rule of law as fertile ground to allow growth and welfare, development and freedom of citizens” and assured that “we will continue working to build a better future for all based on the strength and guarantees of the rule of law”.