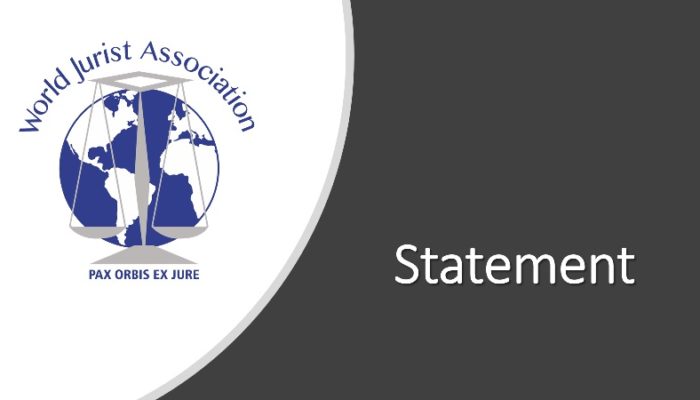 On behalf of the WJA, non-governmental organization with consultative status before the United Nations (UN), which brings together more than 1,000 judges, lawyers, professors and other professionals in various specialties since 1963, before the death in strange circumstances of the Venezuelan opposition politician Fernando Albán, who was under preventive detention in the political police of the Venezuelan government (SEBIN), we strongly condemn such a reprehensible act.

The circumstances of its perpetration, following the international denunciation that Fernando Albán advanced along with other groups of opposition politicians against the Venezuelan government; his arbitrary detention without a warrant, at the airport upon entering Venezuela; procedural delay in holding the first hearing before a judge; the information transmitted by Fernando Albán, to his lawyer and a relative, of being pressured to implicate, in a testimony, other opposition politicians in criminal acts; the untimely conclusion of the Prosecutor General (of null and void appointment), regarding suicide as the cause of death in an incipient investigation still in process; the serious contradictions between the official versions of the facts and the precedents of similar cases inside the political police (SEBIN). All these circumstances, and others, produce serious evidence that generates a serious basis for considering the death of Fernando Albán as a crime against humanity.

Therefore, we demand an objective and impartial investigation, in compliance with the rules of due process, where the right of the family of Fernando Albán to intervene during the procedure, his right to obtain truth and justice for the participants, is guaranteed, including possible determiners.

The WJA adheres to the request made by the UN, by the governments of different countries and by countless international pro-human rights organizations, so that the investigation into the cause of Fernando Albán’s death is carried out in a profound, exhaustive, independent, transparent and international way, and with the integration of his relatives, for which the WJA offers its active participation and contribution, if required. Our organization makes available its World Associations of Judges, Law Professors and Lawyers, in the search for truth and obtaining justice through law.

The death of Fernando Albán in conditions of serious presumption of extrajudicial execution recalls very dark moments in history. Let us remember the case of Steve Biko, an icon of the fight against racial segregation in South Africa, imprisoned for his ideas and killed in 1977 by his custodians of the police who, after twenty years in a truth commission, confessed their crime. On that occasion, several members of the WJA condemned this abominable murder, in similar terms as we do in this act.

The WJA aims to strengthen, promote and spread peace through the rule of law, recognizing the dignity and equal rights of all members of humanity, inspired by the values of freedom, justice and peace, in accordance with the Preamble of the Universal Declaration of Human Rights.

“The absence of law in the world community is the greatest threat to the extension of humanity”.