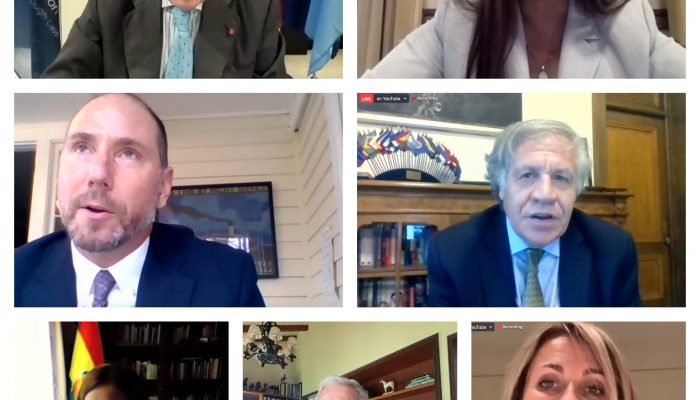 On November 12, the WJA celebrated the fourth Opening Session of the World Law Congress Colombia 2021 from the Headquarters of the Organization of American States in Washington, D.C.

“We are far from a reality where human rights are protected in real time, and there is a long way ahead to guarantee effective mechanisms”.  This is how the Secretary General of the Organization of American States, Luis Almagro, assessed the current situation in the debate “Human Rights and Justice: Fundamental Pillars for the Strengthening of Democratic Systems“. Almagro recognized that “political systems have to be structured in the best way to make justice work in societies, and this is the independence of power”.  He also pointed out that “the main problem of democracy is impunity, a red line that separates it from dictatorship.

Tamara Sujú, WJA Representative before the International Criminal Court and director of the CASLA Institute, chaired the panel and highlighted its importance, assuring that “respect for human rights and justice tells us when democracy degenerates into dictatorial government”, and she bet on universal justice to denounce the crimes of Latin American dictatorships.

In this direction, the former president of Colombia, Álvaro Uribe Vélez, highlighted how tyrannies are detrimental to justice in the Latin American region and assured that “in this area everyone talks about human rights, but for many it is an electoral ploy”. He added, furthermore, that “we must be careful to avoid people who do not really believe in human rights from reaching power, since not everyone can defend human rights”.

Regarding the situation in Latin America, Dita Charanzová, Vice President of the European Parliament, highlighted the fundamental role played by international institutions against countries that violate human rights and highlighted the action of the European Parliament, which, she said, has openly supported investigations into crimes against humanity. In this sense, she requested “that the international community continue to speak out in order to continue rejecting dictatorships and, thus, achieve the absolute reestablishment of human rights in those Latin American countries subject to these regimes”.

Meanwhile, Karen Longaric, former Minister of Foreign Affairs of Bolivia, emphasized that “only when the rule of law is solid, the justice system is independent” and noted that “even when governments emerge from elections or votes, they can have dictatorial and totalitarian characteristics”. Regarding justice, she stressed that it “does not exist in times of dictatorship, because the judicial body and the Public Prosecutor’s Office are obsequious with dictators” and she questioned the role of international human rights organizations since, she assured, “they have a role to play in protecting human rights, but some of them do not work or do so poorly because they have a biased view towards judging or appreciating human rights violations”.

Javier Cremades, president of the World Jurist Association, concluded the panel alleging that “there is no assured peace if there is no submission to the law” and stated that “human rights are there so each person can live their life with dignity and see all their objective value recognized”.

This Opening Session was the fourth meeting preceding the World Law Congress to be held in Colombia in 2021. The President of the host country, Iván Duque, also participated in this session, and through the projection of an institutional video he committed himself to “continue promoting the strength of the rule of law as fertile ground to allow growth and well-being, development and freedom for citizens” and assured that “we will continue working to build a better future for all, based on the strength and guarantees of the rule of law”.

Excellent article analysing the #politicalcrisis in #Peru Written by César Landa Arroyo, former President of the Constitutional Court of Peru, Professor of #ConstitutionalLaw at @DerechoPUCP and Trustee of the #WorldLawFoundation twitter.com/WorldLawFound/…

"At the WJA event, I reasoned why democracy and justice must go together. The rule of law depends on the best functioning of both, as they generate the best guarantees of protection. Non-justice -or impunity- is one of the red lines that separate democracies from dictatorships" twitter.com/Almagro_OEA201…