Skip to content
World Jurist Association > About the WJA > Ruth Bader Ginsburg: A Jurist for History 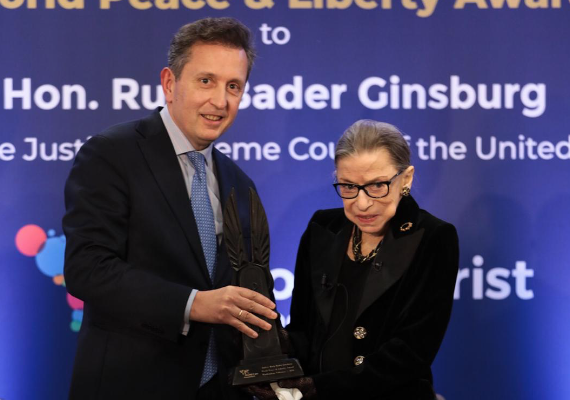 The author met the American judge and awarded her with the World Peace & Liberty Award, given by the World Jurist Association.

Ruth Bader Ginsburg´s death (1933-2020) has caused a huge emotional and political impact in the United States. This event also represents an earthquake in the American electoral campaign, but her figure and her legacy are global and will endure for generations.

The chief aim of her professional career was the struggle for the equality of women and men before the law. That was the reason why the World Jurist Association decided to give her the World Peace & Liberty Award. On that occasion, the judge spoke again about another of the pending issues of the judicial system: the judicial independence. An independence that she had advocated in public and had personally exercised throughout her entire career, before, during and after her entry into the U.S. Supreme Court, nominated by Bill Clinton and confirmed by the United States Senate in 1993. This culminated a career marked by the momentum and determination, leading her from intellectual ostracism to the highest court in the world. Ginsburg and all the people whom she represented were beginning to win the battle for equal rights.

I meet Ruth Bader Ginsburg in Madrid at a lunch organized by our mutual friend Richard Gardner, Professor of Law at Columbia and U.S. Ambassador to Spain a few years after her nomination to the United States Supreme Court. Ruth was always involved in meeting different people, young people, of other faith and cultures, speakers of other languages, and that’s how it was until her last days. Afterwards, I visited her several times in Washington, where I got to know her family and finally had the opportunity to enjoy some unforgettable moments with Ginsburg on 6 and 7 February 2020. She was already a world icon, not only of Law but of Culture. Her physical weakness, combined with her intellectual power and purpose were cool, strongly inspiring for millions and millions of people. It was in Washington, just weeks before the global pandemic unleashed its full destructive power. I had by then finished reading her book, My Own Words, where her achievements and ways of thinking are recorded. It has to be translated and published into Spanish. The day before the award ceremony, at the dinner we held in her honor, instead of paying attention to the personalities, some with the rank of Head of State, she devoted her attention to answering questions and showing affection to several young women who participated. As the host of the event, I decided to sit her next to my 19-year-old daughter Arancha, with whom she had a long and friendly conversation, which both of them thanked me profusely. Protocol and paraphernalia bored her. We talked about her interest in meeting Pope Francisco. She was fascinated by him. We agreed to organize a meeting in Santa Marta, without protocol, the following autumn. The idea was arranging the appointment and invite relevant judges from Europe, Latin America, Africa and Asia. She would invite Roberts, President of the Supreme Court and other Judges. Unfortunately, the Project could not be completed firstly because of the pandemic and then by her death.

That magical night at the Watergate Hotel, with an empathetic look and a smile full of affection, she told Arancha in a soft but wise voice: “You will be whatever you want to be, as long as you work to achieve your dream with perseverance and passion. Don’t let anyone stand in your way of becoming the woman you want to be”. She had fought the battle of her life for that to be possible.

The next day I had the honor of presenting her with the World Peace & Liberty Award, which had been previously granted to Sir Winston Churchill, Rene Cassin, Nelson Mandela and, just a year ago at the Royal Theatre in Madrid, to King Felipe VI. She showed herself serious when received the award, until I asked Judy Perry Martinez’s daughter, Arancha and Leah to accompany her on the stage and give her the statuette again. At that moment, her eyes brightened, bringing a warm smile to her face. What is considered by many to be the Nobel Prize in Law had never been awarded to a woman, and Ruth was clearly the right person to receive it. As soon as I was elected president, I proposed her nomination to the WJA Board, and this was unanimously accepted. We, jurists of the world, owed a debt of recognition to the women’s equality movement. During the debate that the three of us held after the award ceremony, including Judy Perry Martinez president of the American Bar Association, Ginsburg reminded us that the rule of law is defined, in essence, “as the rule of laws and not of men” and warned that ” the rule of law must always and under any circumstance control our destiny”.

The world has lost a great woman and an enormous judge. Life is ephemeral, but the ideals pursued with conviction, authenticity, moderation and courage remain. RBG has died. A woman full of talent and courage, an intense life into the care of her family and professional work, dedicated to her ideals, though I do not share them all, may she rest in peace. She has been a good example of coherence and leadership, an admirable crusader for equality, a jurist for the history.